The book is an ageless technology,

but is its time coming to an end.

Book Readers represent a simple technology capable of making substantial changes in the way we interact with our world. The development of the printing press (reputedly by Caxton in the 1400s) made the written word available to the common man. Prior to this, much information was transmitted verbally amongst “normal” citizens. The use of mobile phones as a method of accessing written data is a modern development of this process.

Perhaps book readers and mobile phones represent an intermediate step to the enhanced processing of the written word.

The difficulty with the process of the development of technology, is to 1st define what is wanted. Knowing what is wanted, is the first step of innovation. The mobile phone of our era developed from a simple phone device to a data access and processing device.

Probably the new frontier which many news agencies grapple with today is indeed the progression from the printed word to the digital word. The market for newsprint and magazines is shrinking. People are becoming much more accustomed to accessing digital information.

As in any new innovation, the basic issues relate to: product, price, marketing and distribution. Too many companies have their roots in an era where they believe that people should pay as much for the digital word as for the printed word. The reality is that in the printed world, much of the cost of the production of the information exists in the printing distribution and marketing of the newspaper or magazine. If these are removed from the equation-something that the digital world does very well, newspaper and magazine companies can remain very profitable on much lower budgets.

Let’s use a specific example. If someone is willing to pay two dollars for a single printed newspaper, would they be willing to pay 40 cents for access to 3 or four digital newspapers. If the profit margin on the single newspaper is $.10, the consumer now has access to more magazines at a lower cost. The print companies are actually selling more product at the same margin, and so should be in fact becoming more profitable not less so.

The problem all too often nowadays is that the companies insist on selling each of the digital versions of the newspapers at the same price as the printed version. Dinosaurs in the digital era!

Let’s paint a picture of a new world. A consortium of train companies, bus companies, newsagents and telecommunication companies set up an access superhighway for newspaper and magazine media. The average person could arrive at the train station, tap into their digital upload access point with e-book reader and walk away with a charge of say $0.40 added to their “Go Card” (a transport pay card) for access to several newspapers and magazines. There’s no point in worrying too much about whether the magazine or newspaper contains exactly what you want. With such a plethora of information available you can pick and choose, or even just scan through the pictures.

It becomes obvious in this example that it is not the technological challenges that are a problem with the implementation of this proposal. It is the social engineering challenges that form the biggest impediment. "Who gets paid for what and how much?", is actually the most important question here.!

The other problem of course is that everything doesn’t happen at once. Wars are won, one battle at a time. Access may well be developed ,one train station at a time. The future will be ours to see. Que Sera Sera. What will be, will be.

It is quite likely that with the addition of specific technological features, a new interface: “the sprite” may develop. A sprite is a coalescence of technologies: incorporating location or GPS ability with processing power and sensors. Where time takes us remains to be seen. The book "Lee Hogan : “Belarus”" showcases the role which can be played by sprites in war and in peace. A phrase from one of the aliens watching our colonists remains firmly to mind. “They have developed and used sprite technologies to a level almost as much as us in our prime”. 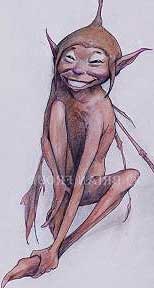 A different direction for development of book reading and information technologies.

In science fiction, a prime example of the future development of visual reading technologies is that of Eron Osa who lives in an era where information is electronically hardwired into the brain to enhance biological processing with the assistance of computer paradigms. To lose one’s inbuilt computer or “FAM” is to indeed lose a part of one’s mind.

Our next example from science fiction is that of “Crier”. Crier is an intelligent Shrub (Joseph Green : Conscience Interplanetary). Of interest here is that the intelligence is a “distributed” intelligence. Not a single intelligent independently functioning unit which is the average human we know today.

The example of electronic aids to memory is probably most cogent to me in the example of the Skroderider. (Vernor Vinge : A Fire Upon the Deep). These are plant beings existing in the” Upper Beyond” of the galaxy. They live on little mobile platforms and use technology to enable them to have a memory. In the natural form, they exist only in the moment. They do not have the capacity for long-term interactions with their environment due to their lack of memory. Of interest here is that the technology at least appears superficially primitive. While information can be downloaded and stored in volume, it actually requires repeated exposure i.e. learning ,to allow memory to be laid down. Important things are learnt and remembered by repetition. A very interesting principle.

What examples come to mind to showcase books/reader aspects of technology in Brisbane?

I think we are still stuck with the printed book. We are seeing the introduction of apps that read Internet address patches throughout tourist zones, as a way of allowing access to specific relevant information to tourists.

If you are interested in books, I suggest visit a second-hand bookstore. Brisbane still has many, but you do have to look for them. There is a great sci-fi bookshop in the main street of Coolangatta on the Gold Coast. A good way to spend a bit of the day, browsing books.

If you’re interested in cultural information – visit the Museum or the Art Gallery at South Bank. Best of all, there’s lots to see and it’s free. Brisbane believes in sharing with the people. Make the most of it. It’s a great opportunity.

Tap on- tap off newspapers and magazines at public transport facilities.

The first steps on the road to the “FAM”. The melding of human and machine capacities.

Do you want to know more? (On google maps)- much akin to the TV front page on Starship troopers, the movie. The obvious super tourist app- perhaps even engineered in the Wikepedia contributions format.

Other Examples from Science Fiction include:

I think we have come a long way from the Star Trek days, when the height of information technology was represented by a computer that could take voice commands. These days, phones can undertake voice commands. There are apps on phones that will translate signs from photos taken by a tourist in any language. There are many applications for vocalising the written word, and converting spoken speech to the written word. What was once the height of imagination, is now simply commonplace and expected.

Frank Herbert: “Dune”.
Thou shalt not  make a machine in the form of the human mind – Orange Catholic Bible. In these novels the point is made that human beings can in fact be the ultimate computing machines. They can take input from many sources, and in the absence of perfect information can extrapolate and project valid conclusions. Computers in the current day and age are beginning to learn but have still not caught up with this capacity of the human being. In the era of Dune, the emphasis is on acquiring skills not just information.

Lee Hogan: “Belarus”.
This novel highlights the importance of information processing at the interface of human and machine. But some of these machines called sprites are very small indeed. They are responsible for undertaking many simple functions necessary in coordinating activities the technological civilisation. A sprite is a combination of processing power, a location sub device such as a GPS sensor and another specific sensor at the simplest level. They operate independently but as part of a complex whole and interface with a communications Internet to transfer information. Information flows from many sources to computers and people .

Jerry Pournelle: Janissaries series.
This author explores the value of knowledge in allowing humanity to escape from the Dark Age following a nuclear holocaust. Even aliens armed with nuclear weapons and prepared to use them to bombard human civilisations back to the Stone Age, would be unable to destroy information, where a minimum print run constitutes over 1000. Knowledge retention focuses on traditional means such as the University, but also shows the necessity of breaking this information down and teaching it to people in a format that they can understand and use. One of the researchers at University makes the point that it has been difficult to teach people to wash wounds to prevent infection by germs. Another researcher suggests that they have gone about it the wrong way. Their own  approach was to teach the people that infection is caused by contamination with “ little devils”. These can be killed by washing and by boiling the dressings.

H Beam Piper: Space Viking.
The knowledge within the people and the metal in the man is what makes civilisation. Not all people are born equal. Some people are cleverer than others and can learn more, do more and make more than others. These people became the Space Vikings of this story. When spaceships travel between the stars, much spare time is involved. Most of our  Space Viking soldiers use this time for study and for hobbies and to learn new things and new skills. Space Vikings form a naturally superior class of humans due to superior genetics.

EE Doc Smith: Masters of Space.
Here a new form of information gathering is explored. Through the medium of “Peyondix” – which you could describe as a type of astral travelling, information is sourced from many creatures and planets and stored within a computer. The information is then presented to the people but it is the method information gathering and transfer which is unique – perhaps supplanting the book readers of our webpage.

Brian Stableford: Halcyon Drift.
In this novel, information is stored within two entities sharing the same body. The coalescence of the alien “The Wind” and a human being sees information being processed at two levels – that of each of the entities within the body.

Lloyd Biggle Jr. : Monument.
Information is stored in a traditional format of the book. The human inhabitants learn as humans learn – some remembering but not understanding and some understanding but with normal memories. The computer system of the legal world stores all legal information and allows decisions to be made by a computer weighing the values of references to a legal case in order to make a decision. The novel highlights the difficulties of storing the immense amounts of data produced in the modern world. Information can be lost simply by losing the references to it. Indexing is all important.

Gordon R Dickson: Dorsai series.
The human race spreading throughout the galaxy discovers the need for specialisation in the acquisition of knowledge and skills. A trade develops for humans and their skills – such being cheaper than developing the skills on every planet through the medium of an education system teaching everything to everyone. It is the information and skills within the people that is of value, and less so the information in the computer system.