Powering of nano-devices will restrict the technology's implementation.

Kinkajou : How are Nanotech Machines Self-Powered?

Options include exploiting random vibrations or motions (such as those near a roadway), temperature gradients (for example, ground temperature is fairly constant several meters below the surface, so link this environment to another with a different temperature), biochemistry, and external energy sources such as ultrasonic waves or even audible noises.

Research with the atomic force microscope (AFM) showed the presence of voltage peaks when particular materials (for example zinc oxide nano wires) were stressed or compressed.

This suggested the possibility of harvesting electrical energy from mechanical events in the nano world. These could include such events as a heartbeat, muscle action or the movement of the lung in a breath.

Another future is the coupling of nano generators with solar voltaic input power, possibly generating a form of independent “smart dust”.  Indium-Tin-Oxide (ITO) constructs have been shown to be transparent, again suggesting other possible applications.

Kinkajou : How can machines produce power at nano-scales?

Erasmus : The main approaches are:

Erasmus : Piezoelectric nano generators
An external force is applied to the nano structure e.g. to the nano wire creating de-formation.

Illustration (Below):
What is illustrated is the Working principle of nano-generator where an individual nanowire is subjected to the force exerted perpendicular to the growing direction of nanowire.

Illustration (Below) : Working principle of nano-generator where an individual nanowire is subjected to the force exerted parallel to the growing direction of nanowire 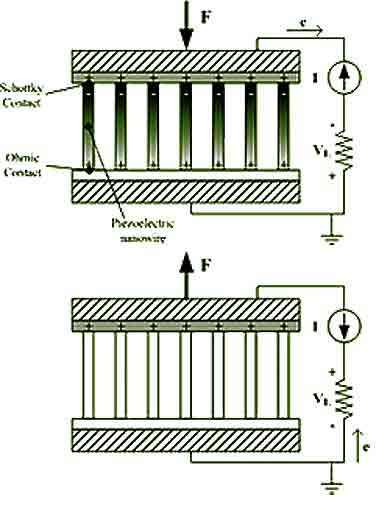 A VING contains three main layers which are the base electrode, vertical nano wires with piezoelectric capacities, and the counter electrode.
A modified version has been incorporated into clothing. Each unit includes two micro-fibres.

One of the micro wire fibres is coated with metal to form a Schottky contact, and the other microfibre incorporates deformable nano fibres and serves as the counter electrode. Due to the partial contact construction, this construct generates DC current.

This would suggest a possible future of incorporating biological monitoring technology into clothing, useful for example in monitoring a human during exercise. 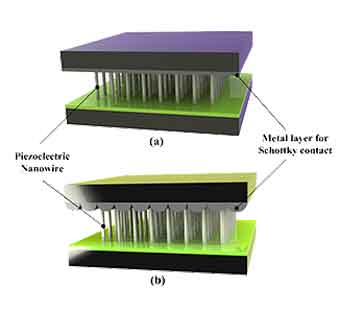 LING also has three elements. The lateral nano wires run parallel to the metallic counter electrode wires providing Schottky contact, both of these elements being layered horizontally across the base electrode. 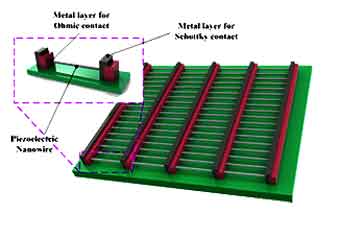 Erasmus: Nano-composite Electrical Generators (NEG).
In this configuration, the nano wires are embedded in a polymer matrix between the two electrodes (base electrode and counter electrode). 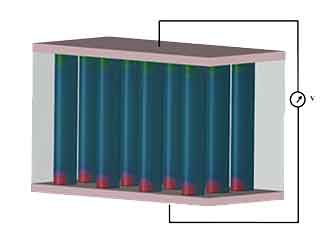 This type of nano generator is unique as it uses “organic” materials for harvesting mechanical energy.
The Triboelectric nano-generator has three basic operation modes: vertical contact-separation mode, in-plane sliding mode, and single-electrode mode. They have different characteristics and are suitable for different applications

Many materials (organic or inorganic) exhibit the tribo-electric affect so power generators can be designed for many applications as many different materials as diverse as: metal is silk or wood can be used.

In this device, temperature variation over time creates polarisation and a charge variation in a nano wire (e.g. zinc oxide nano wires maintain pyroelectric charge separation due to their semiconducting characteristics).

By linking these elements in a circuit, this “pyroelectric effect” creates a current which can be harvested. These devices can operate in a uniform thermal field, relying on temperature variation in time to create the potential energy exploited by the device. Heating and cooling can both generate power, (with different polarity).

The pyroelectric nano-generator has a good stability, and the characteristic coefficient of heat flow conversion into electricity is estimated to be ∼0.05–0.08 Vm2/W.

Generally in thermal-based electricity generation, the “Seebeck effect” (not the pyroelectric effect) is exploited. A “consistent” temperature difference between the two ends of the device drives the movement of charge carriers (electrons). This structure relies on the existence of a thermal gradient across the generator.

The primary pyroelectric effect, Which describes the charge produced in a strain-free case, dominates the pyroelectric response in PZT, BTO, and some other ferroelectric materials.

The mechanism is based on the thermally induced random wobbling of the electric dipole around its equilibrium axis, the magnitude of which increases with increasing temperature.

If we apply a change in temperature in the nano-generator from room temperature to a higher temperature, the increase in temperature will result in that the electric dipoles oscillate within a larger degree of spread around their respective aligning axes.

The total average spontaneous polarization is decreased due to the spread of the oscillation angles. The quantity of induced charges in the electrodes is thus reduced, resulting in a flow of electrons.

If the nano-generator is cooled instead of heated, the electrons will then flow in an opposite direction.

Kinkajou : So tell us about some new nano tech things we might be building.

Erasmus :
Molecular printers: current technology is embracing 3-D printing the macro scale. However nano scale offers the opportunity to custom design functional molecules in molecular structures by piece. This may become very important in biological research and in individualizing bio therapies in the future.

Pharmaceutical and drug delivery with the ability to control or influence where and what is released is an obvious and important application of nano scale materials such as liposomes and micelles. Alternatively DNA origami structures have also been fabricated and used in drug delivery.

Doxorubicin has been intercalated with a DNA origami structure achieving significant drug transport and delivery in experimental systems.

Carbon nanotubes can function as myomers. When a carbon nanotube is placed in an ionic solution, it absorbs the ions, and will expand and or coil up. If these irons are removed, the carbon nanotubes will uncoil. This feature mimics the action of muscle fibres (myomers).

Kinkajou: Perhaps the day of the MechWarrior will soon be here.

Erasmus : One new and unusual application certainly calls to me. Nanostructures can be fabricated to provide super hydrophobicity. Water droplets collect in such surface will roll down the surface without bonding to the surface.

Kinkajou: I can see what you’re getting at. This is the technology of the water collection devices in the sci-fi planet “Dune”. The Fremen were able to collect water from the desert using special polymers which lost their heat extremely quickly and gathered condensate water. A technology which may have substantial application in the arid areas of our world today.

Erasmus : Other applications include weaving nano fibres together to form fabric. These fibres can have some unusual properties, depending on their structure. (Carbon nanotubes are resistant to stains bonding to them.

Fibres made of nano layers of charged material can repel many other chemicals). Properties may include stain resistance, water resistance, ability to carry chemicals or pharmaceutical agents, and biodegradability.

Nano polymers can be fabricated in such a way that when a material is damaged, nano monomers leach out and then combine to repair the damaged area.
Electricity generating nano devices or virus-like particles can be incorporated to generate energy for incorporated sensors, as for example in clothing.

I think the Holy Grail of nano manufacturing is the creation of programmable matter. These nano devices can receive instructions to perform particular tasks. I suppose the long-term issue is to what extent and at what cost such programmable matter can perform operations in contrast to existing biological systems. 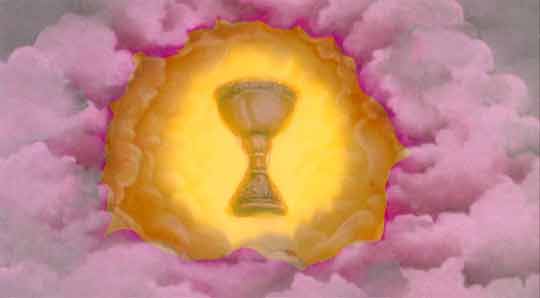