Without Sheep, cattle, Wheat, Rye and Barley, civilisation may never have had a chance to arise. These all appeared in Sumeria: the first civilisation.

Old Tech that has built our World: 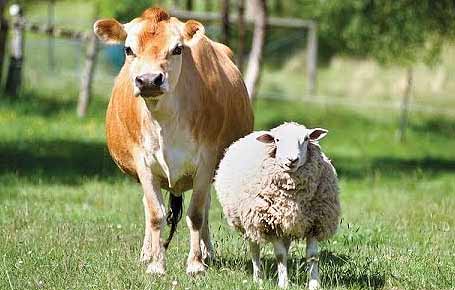 Kinkajou:  Why do cows and sheep deserve to be mentioned in a technology web site?

Erasmus: Cows and Sheep represent amazing pieces of biotechnology that marked the first steps of humans onto the path of civilisation. With cows and sheep, humans began the transition away from hunter gathering to a more technological form of food production.
These animals take inedible materials in the form of grass (cellulose) and

Turn this into food: meat and milk

Turn this into clothing: skins. 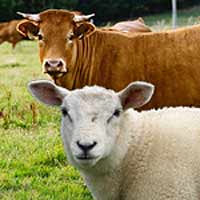 Erasmus: Human beings cannot obtain nutrition from grass. Cows and sheep as ruminants are capable of creating food for humans from grass with great efficiency compared to many animals. Their herding tendencies make them manageable for semi-nomadic humans.

Humans help to protect and feed the animals and in turn are fed by the herd animals. I don’t think civilisation is possible without the behavioural modifications in these animals.

For example, the Australian aborigines would probably never be able to make the transition to becoming nomadic herders since their only herd animal was the kangaroo. The behavioural characteristic of these animals makes them difficult to use in herd animals. They don’t cluster well enough, are too fast and are difficult to manage for people.

So cattle and sheep are amazing bits of technology that enabled one of the basic steps of civilisation: the progression from hunter gatherer to nomadic or seminomadic herdsmen.

The growth of human population fostered by herding essentially guaranteed that this lifestyle overpowered the resistance of the hunter gatherer lifestyle, resulting in the spread of technological civilisation. 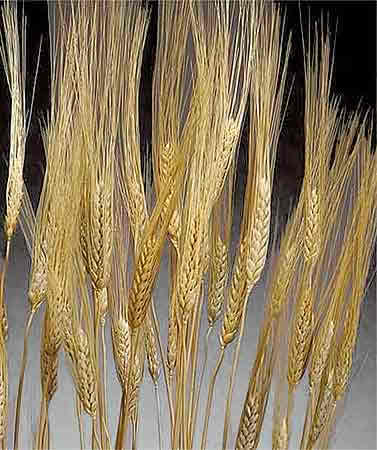 Wheat and Rye and Barley

Kinkajou: Why should cereal grains make an appearance in a technology web site?

Erasmus:  Funny you should ask. These grains are probably the spark that built the civilisation that we know today. Indications are that about ten thousand years ago, give or take a few thousand years, new grains spread throughout the pre- Sumerian civilisations of the Tigris – Euphrates river systems.

These grains mark the first step towards agriculture and the movement of civilisation away from nomadic herding as food production. In a similar fashion to herder populations crowding out hunter gatherers, the extra food production inherent in farming meant that more people could be supported by a given unit of land by farming technology.

This would result in farming civilisation crowding out nomadic herders in many of the richer soil, better rainfall areas of the earth. Egyptian civilisation based on farming the margins of the Nile River dominated the Middle East for a long time.

Kinkajou:  I heard that humans have been wild gathering cereal or vegetable crops for some time. For example in pre-Sumerian times, humans would dig up nut grass copses.

This gave a high yield in terms of calories per square metre and the digging harvesting process also guaranteed that there would be a better denser crop in years to come. (Due to the nature of growth of nut grass).  So what’s so special about rye and wheat and barley?

Erasmus: again, there are some indications that there were some major changes in the genetic nature of these grasses about ten thousand years ago, give or take a few thousand years.

Firstly, Barley developed 6 lines of seeds per head of grass instead of the usual two. While crop yields were fairly similar due to the higher lateralisation of stalk growth in the older grass variants, this resulted in some changes.

The other consequence of this style of growth is that more of a plants resources were directed into producing the target seed crop, rather than into vegetative growth.

This tech breakthrough is akin to that of the green revolution when dwarf strains of many cereal crops especially rice, meant that more of a plants energy was put into seed production and less into vegetative growth. The resultant increase in crop yields has allowed human food production to keep pace with population growth for the last forty years.

Secondly, there was the appearance of the stiff rachis on the seed heads. The head of the cereal crop forms on a softer outgrowth of the plant called the “rachis”. Naturally as the seeds mature, the rachis kinks and the seed head droops. This allows the seeds to fall to the ground and the crop becomes self-seeding. Unfortunately, for agriculture this process is a disaster as the crop (the seeds) become hard to gather from the ground.

A rachis or stalk that does not kink, requires human intervention to collect the grain and to plant the grain. It is a basic essential requirement to allow the agricultural way of life.
There are some authors who believe that it would be difficult for this to appear as spontaneous mutation as a number of genes are involved and the probability of all the necessary changes coming together by accident is remote.

Nonetheless, the appearance of these grains marked the next step on the upward path to civilisation. Our western civilisation would not exist if not for this tech from the past.

Kinkajou: so what have you learned, Goo?

Goo: Once my people, the numbat, dominated the Australian Savannah. Although we were not well physically adapted to living on our prey namely termites, we were able to flourish across this harsh arid landscape.

We are one of the few diurnally active small marsupials. This is because we need to attack the termites when they are active. We had learned to break into the tunnel tracts connecting the termite mounds with their farmed landscape. Our senses were able to detect the presence of termites in their accessible tunnels.

With the coming of predatory species such as foxes and cats, the Numbat faced circumstances with which we had difficulty coping. Our diurnal lifestyle and solitary life habit made us easier prey for predators. We had genetically evolved few coping strategies to deal with the actions of predators.

Humans by contrast, are able to utilise the biological strengths of other species using their intelligence. Humans are able to work together to achieve common goals. Humans are individuals as well as social animals.

The development of herd animals such as sheep and cattle were the first technological steps on the road to technological civilisation.

The development of wheat Rye and Barley also made possible the next step on the road to logical civilisation.

Each step on the road upward was marked by ability to sustain larger and larger units of human population. The path along which humans marched forward began to lead ever upward.

But I have seen on this site that walking in the upward path is not without its detractors. For humans, your road continues. The challenges you will face may well be even more difficult than those faced by my people with the advent of the Europeans to the Australian landscape. Beware. Beware! Beware!