Quantum world in scifi suggests many new directions to explore.

Kinkajou:The quantum world is a true frontier. A world which we can only enter only with our intellect. A world which at times seems to lack those most basic requisites of normality: time and space.

In the quantum world, an event occurring to one particle (such as a photon) can be mirrored throughout the known universe in time and space. It is as if time and space did not exist – in some dimension of our perception.

Late 19th and early 20th centuries saw a burgeoning understanding of the nature of matter in our world. New aspects of matter include: wavelike characteristics for particles, spin, and appreciation that it is impossible to know at the same time both the position and momentum of a particle with absolute precision,

We developed theories such as Bell's theorem, often described as a “no-go theorem”. This is a theorem stating in its simplest form that “No physical theory of local hidden variables can ever reproduce all of the predictions of quantum mechanics”.

The observation of the existence of quantum entanglement between paired particles become a down payment on the proof of the existence of a quantum world, seemingly operating at loggerheads with our  understanding of the physical world in which we live.

Quantum effects do occur naturally and visibly in our physical world. They are most obviously visible in high energy phenomena such as astronomical phenomena. 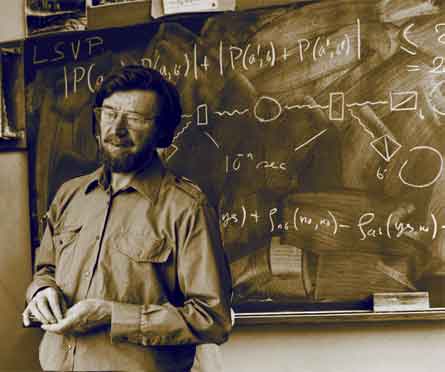 
The key concepts of quantum mechanics events we would describe are:

Kinkajou:The importance of the quantum world is that it can be a tool with which we can interact with and change aspects of our own existing world, in a manner which would otherwise appear to be impossible.

And it is on these aspects on which many of the dreams of Science Fiction are based. The ability to travel across interstellar space – in effect bypassing the physical world.

The ability to travel faster than light.
The ability to communicate across vast distances instantaneously.
The ability to be in two states at one time – accelerating our computing ability and creating new applications in cryptography.

Kinkajou:What does this technology
remind me of in Brisbane?

Travelling in Brisbane in the City, or at Southbank: a psychic sense of hunger permeates all simultaneously. Eat and Enjoy.

James Blish: Cities in Flight series. The cities are capable of using the Dirac transmitter for communications. However, it is usually the police at the other end of the line and everyone can hear what you are saying. Using an instantaneous transmitter which bypasses the restrictions of three-dimensional space would seem to have its own problems.

Quantum communication promises to be much more secure, encryptable and addressable. We can only talk to you if you hold the other half of the pair of entangled particles.

Neil Asher: Grid linked. We have tools able to work at the atomic level and in hyper dimensions where the dimensions of space do not exist. This allows us to bypass many of the restrictions inherent in working in the three-dimensional universe.

This is inherent in our usage of the runcible to transmit people by passing the restrictions of space. Our knowledge of five dimensional singularity mechanics, Skaidon warp and Skaidon technology is the basis of our success, a success in a technology that many unaugmented minds cannot comprehend.

The author makes the point that it is the AI who can understand five dimensional singularity mechanics – and not the unaugmented human. It is possible that we may give birth to an intelligence which surpasses our own through the quantum world.


David Brin: Star Tide Rising. One of the alien species uses a probability drive to travel throughout the galaxy. Unfortunately it can be erratic and dangerous. But it delivers speed that allows anyone using the drive to literally always arrive first on the scene, before anyone else.

The probability drive appears to be a form of quantum teleportation of mass objects to distant points in space. The author showcases a myriad of technologies which could be part of our future – but it is our psychology which directs us to make our own choices. Many of the species in the book have a discomfort with reality bending physics and insist on a solid attachment to reality.

We see the creatures created in series “Babylon 5”: the Vorlon. The Vorlon are composed of energy and are linked together by telepathic communications which appear to operate independent of spatial distances or dimensions.  All the ones are part of the many, but the many a part of the one.


Ansible communications, in effect a type of quantum radio features prominently in many books and stories.

The ability to use quantum communications in real-time is a substantial enhancement to naval capacities, enabling the transfer of weapons data between ships and the coordination of ship movement and weapons strikes.

Orson Scott Card’s book “Ender’s Game” engages the concepts of quantum communication, firstly when Mazzar Rackham defeated the “Bugger” invasion fleet by destroying the Queen on her ship. Secondly when humans developed a working model of the Ansible, installed these in their ships and then and launched them to attack the aliens’ home systems.

A different direction for development of this technology in the future:
Clever New Applications:

Other technologies based on quantum effects include:

Kinkajou:If humanity is ever to spread beyond the planet Earth, fast communications and fast travel are critical capabilities. We only need look at the examples of history to see how difficult it has been for human empires to geographically dominate the planet, when the speed of movement is limited to that of a horse or sequential team of horses.

The Romans used engineering to solve many of their problems. They built roads traversing Europe, and enabling fast chariot transit. Even today many of our road dimensions are based on the dimensions of the roads the Romans built.

The Mongols used teams of horses to transmit messages across their empire. Many Mongol warriors maintained several horses. Warriors could travel with their team, living off the land. In the European invasion of Hungary by the Mongols, more warriors would travel up to 100 miles per day (160 km).

The Mongols also promoted trade and travel across their empire- not something many of us realise.

This spans to approximately 1.87 light years from the Sun. The celestial body Pluto ranges approximately ten light hours from the sun. Once again distance becomes important in planning travel.

The quantum universe may well be an answer to our problem with distance. In the quantum world, space appears not to exist. The phenomenon of entanglement suggests that we can communicate “faster than the speed of light” by using quantum mechanisms.

Security is another aspect of quantum communications. Not only can we bypass the limitations of the speed of light, but we can code our messages so that they cannot be intercepted and their coding broken.

We have much to learn in the fields of esoteric science such as Psi and in the quantum world. But the promise. Oh, the promise!