Growing plants involves conquering a series of chokepoints for the plants' growth:

often first water, then nutrients, then space and light.

If you can’t build out, build up – The future of farming.

Kinkajou : So, what exactly do you mean by the concept “vertical farm”.

Erasmus : A vertical farm is a space used for agricultural production that is more than one story in height. There are a number of different descriptions that are often related to the concept of a vertical farm. These include descriptions such as living wall, vertical garden or green facade. These are not vertical farms.

A vertical farm is a farm in the true sense of the word. It is used to produce food. However, the organisation of vertical farm is vertically based, not horizontally based (on the ground), as is the traditional farm. The world is running out of arable land: i.e. horizontal   space. Therefore the only space we have available for us to farm is up, not out.

Kinkajou : Why bother? Up till now the world has coped with population growth by simply increasing the yield from existing farms, and perhaps turning a bit more forest land into farmland.

Erasmus : True. However, it is becoming obvious that all the good arable land is already in production or is degraded enough that it will not be producing much at all. There is not a lot more arable farmland to be obtained on the planet.  If the human population increases 33%, there just isn’t enough arable land on the planet to supply a 33% increase in farmland area. 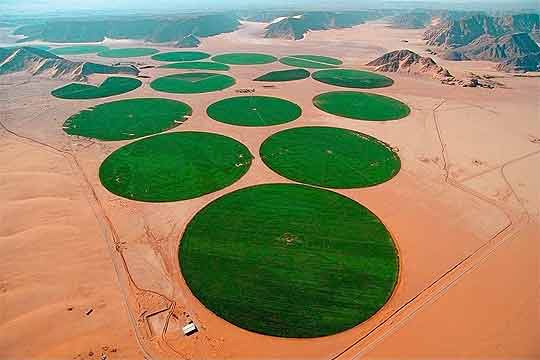 The second problem is that much of the world’s farmland is facing resource shortages.

The most critical resources for farmland are: availability of freshwater, then supply of nutrients and finally availability of good quality soils. Worldwide, there are water shortages as rainfall varies, often with catastrophic results for farm production. Fertilizer is becoming increasingly expensive, and its runoff contaminates freshwater reserves. The burgeoning human population of the planet is competing for living space with existing farmland. Cities are growing. Farmland is shrinking.

We are now faced with the problem of getting the best use out of the spaces and resources we have, not just finding more spaces and more resources. The concept of vertical farms allows us to address these issues.

Kinkajou : Sounds okay. Tell us more about it.

Erasmus : Food is one of our most basic needs, and with a predicted 9.1billion people living on Earth by the year 2050, there will be a lot of it needed. Widespread food scarcity is already predicted to be an issue unless we find ways to increase our food supply. Nostradamus has predicted significant global starvation by about 2040.

If food production cannot be increased, it isn’t hard to picture the consequences; starvation, war, and widespread unrest to name a few. The Question then is how to solve this problem?

An obvious answer is simply to farm more land though there are several problems with this. First and foremost there may simply not be enough land to feed 9 billion people, and when you combine this with soil erosion making once good land unusable you can begin to see why there is no easy solution to the problems of increasing arable acreages.  Soil erosion is perhaps the most punishing aspect of farming with land the equivalent size of the Ukraine in area being affected every year.

As a result of all of this it becomes apparent that the current farming system is not suitable to our future needs. The answer therefore is to change the system.


This is where a radical idea referred to as “vertical farming” comes into play. Replacing huge swathes of land that run across the world with large skyscrapers that would reside within urban centres, vertical farming uses the simple premise of ‘if you can’t build out, build up’. After all, we adopted this creed quickly to maximise the people in our cities, so why not apply the same idea to farming?

Erasmus : As any farmer knows, the art or science of agriculture involves plants overcoming innumerable obstacles or choke points to their growth. Available light is just one of these obstacles are not necessarily the most important one.

Kinkajou : Can you give an example?

Erasmus : Easy! A friend of mine started growing tomatoes in a hydroponic set up that he built and automated. Each 30 minutes, nutrient rich water would be pumped in to wet the roots of the young growing tomato plants. After 30 minutes, the excess water would be removed, leaving slightly moist but nutrient covered, oxygen rich roots.  At six weeks he had begun to harvest tomatoes from 4 foot high tomato plants. The same plants in the soil, were only about eight inches high.

A farmer explained to me: Plants need specific growth factors to grow. They are limited by available:

If these problems are solved as occurs in the typical hydroponic set up, the improvements in plant growth can be phenomenal. In the above example, an 8 inch high plant in soil is a long time away from producing any crop. However, the hydroponic plants are producing food and have experienced phenomenal growth already. Not only are tomatoes available to eat, but the herbage itself from the tomato plants can be used as food for farm animals, for composting (hence as a source of soil nitrogen compounds), or possibly as a fuel source for methane fuel production. 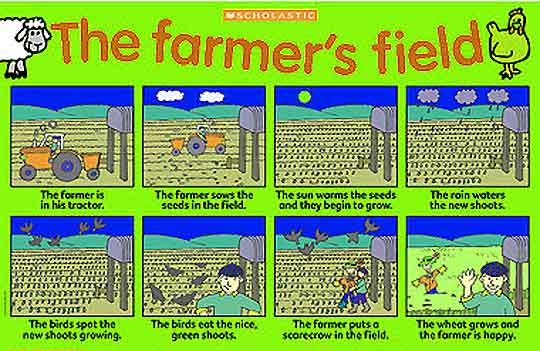 Kinkajou : I see. Vertical farming solves these growth chokepoints for the plants, allowing them to reach their maximum potential. We can grow baby chickens to full edible size in seven weeks, (in the bag). The same is possible with plants if their growth limiting factors are managed.

Erasmus : Yes I find both of these scenarios amazing no matter how often I hear about them. Egg to chook in bag in seven weeks is unbelievable. Tomato seed to four foot high plant delivering crops to harvest is just as incredible in my book.

Kinkajou : Still, what about the light?

Erasmus : Ah, forgot to mention that.

There has been a lot of research in developing narrow frequency LEDs. These can produce light in the narrow band required for photosynthesis. We don’t need to recreate “sunlight” to help plants grow. We need to deliver to plants the energy that they need. That is, plants need light at specific frequencies able to be captured by photo-acceptor compounds such as chlorophyll to drive the process of photosynthesis. In photosynthesis, the biomechanical machinery of the plant cell uses the energy from light to allow the formation of high-energy carbon compounds such as sugars from very low energy carbon compounds such as carbon dioxide, using water is another import. This process is driven by very narrow range of light energy which must be capable of being captured by chlorophyll.

Most of the energy provided by sunlight is actually not used by plants for growth.

I mention LEDs as these are a really exciting technology. They give high efficiency energy to light conversions with low failure rates. All we really need is a source of energy not reliant on burning fossil fuel to drive the process of photosynthesis, to create sustainable process. 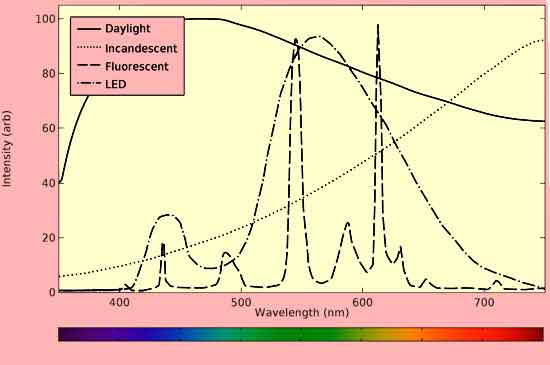 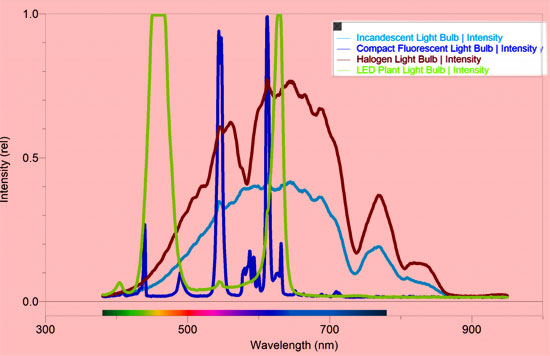 Kinkajou : yes it’s obvious we need to solve the energy supply problem. However, there are a large number of intrepid souls who already use indoor farming methods using artificial light. Commonly these people use lights called sun lamps which use up to 2 kW of energy per light. Usually there are at least half a dozen of these lights in a single room. This type of energy usage is economically unviable except in very specific circumstances where there is a high value crop. 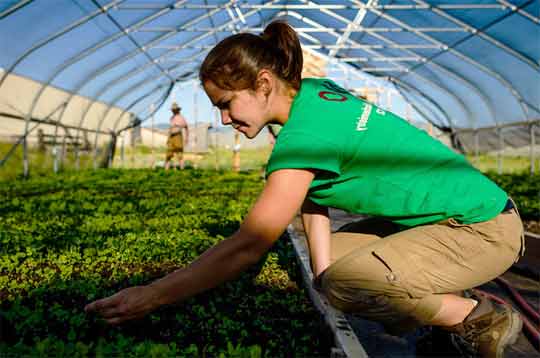 Erasmus : Of course. Still most of these people steal the power they need and they certainly don’t pay for it. So even for a crop like marijuana, it isn’t viable to use commercial power, (typically derived from fossil fuel burning).

Erasmus : Agreed! The problem with vertical farming is not the construction of the vertical farm. The true problem lies in having a successful commercially viable model for farm production. We can build vertical farms tomorrow. But, making them economically viable may not at the moment be within our capabilities . 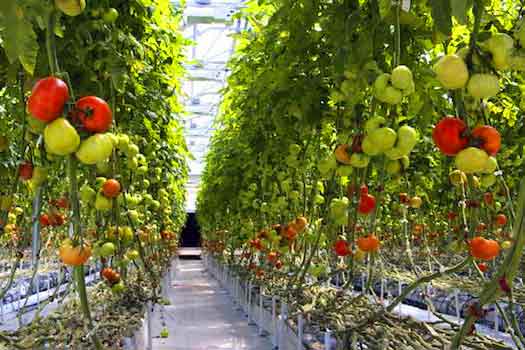 Having LEDs which emit light at specific frequency which can be captured by chlorophyll within plants, substantially reduces energy wastage in using artificial energy to grow plants. The interesting thing about this concept is that a farm may not even seem to be terribly brightly lit to us, as we only need to use a small fraction of the light energy available in sunlight to provide energy to the plants. So even though we as animals think there’s not much light, the plants have all the light they need. Curious.

Because commercial production is about reducing costs, vertical farm design must allow as much free natural light (sunlight) as possible to be used. If the sun provides the light, we ( the farmers), don’t have to do. Sunlight essentially costs us nothing whereas artificial light uses energy which we must pay for and which will therefore reduce the profitability of our farm.

The problem is that these LEDs are still largely a dream for us. There is a lot more research needs to be done before we can develop a commercial LED product.

Some plants also use different energy absorbing chemical systems. An example, is the C4 pathways used in some succulents. These are capable of capturing different frequencies of light to normal chlorophyll. So again a different family of LEDs may be required to produce the light that these plants require.

So I guess the marijuana farmers will just have to wait a bit longer and keep on using the sun lamps that they are ready have. It may be some time before we can engineer LEDs to produce just the right light.

Kinkajou : so where do you think   the energy should come from?

I think, however, in the long run we need to develop a source of power such as fusion power. We’ll talk about that on another webpage. 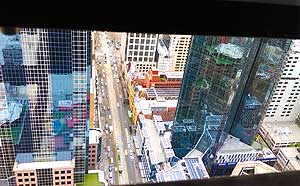 Is there space in our cities for the Vertical Farms of the future?