Technology can create problems as well as solve them.

A friend was growing hydroponic tomatoes. He showed me that he had plants many feet tall within four weeks. Chickens can grow to a baggable size in seven weeks from hatching. A large chicken takes eight weeks. Tomatoes in a garden take months to reach productive maturity. Animals in many backyard farms similarly take many months to grow to maturity as well.

In both cases, natural genetics allows spectacular, in fact explosive growth. However, limitations on light, water and nutrients limit the growth of plants. Optimal nutrition and removal of environmental stressors are similarly important to animal growth. 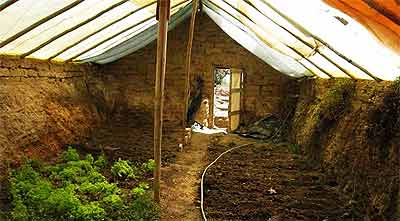 Personally I believe that if I needed to feed myself by growing my own food, I would probably starve to death as I could only dream of being as productive as the average farmer.

And we have not seen the end of this trend for optimisation. Narrow frequency LED’s (light-emitting diodes) promise even faster growth of hydroponically farmed plants, simply by increasing the amount of energy retained in the plant.  Energy at a much reduced cost to broad spectrum light.

The” technology” of vertical farming is not the limiting factor in the proposal. It is social and economic factors that predominantly limit the implementation of vertical farming. Designing our cities to incorporate vertical farms involves widespread changes to laws, building codes and integration of people with their cities. We are doing it (sort of), just not urban planning to do it commercially. Some cities on this planet, especially in south-east Asia could well benefit from preplanning food supplies for their burgeoning mega-polis.

Technology can also create a range of new and interesting problems. Narrow frequency LEDs can help plant growth in vertical farms. They can also be responsible for efficient growth of home cupboard crops such as marijuana. Currently, growing marijuana requires the use of some lamps with a high energy input, usually obvious to anyone monitoring power usage at the average house.

The low energy restricted frequency LEDs may well make growing marijuana much more economic for everybody. Perhaps a consequence of technological innovation that few had anticipated. Technological innovation would of course be most likely to be applied to the highest value crops first of all, before filtering down to common crops such as tomatoes.

The pressure of the growing human population demands new solutions to feeding the multitudes. Vertical farms and reengineering our cities to locally supply more of the needs of the citizens are likely to be an important optimisation for cities of the future.

Personally I believe that humanity can cope with any crisis or problem. The only issue is that it takes time to identify and work to solve a problem. And there may be situations where we do not have one or two years to work towards and generate a solution.

Best examples in science fiction referring to this technology:

The underground food production facilities of the people who escaped the collapse of the US in Robert Adams “Horse Clans” series of books. Director Sternheimer typifies the scientific elite who plan farming on a scientific basis, producing food for of vitamins and minerals and able to sustain life. But it still tastes like shit.

Jestak the Pelbar (Paul O Williams: The Breaking of Northwall), shows the survival strategy of another post-apocalyptic human tribe. Building of walled cities with internal farms and orchards, perhaps with vertical farming incorporated.

Vernor Vinge: Grimm’s World. What happens if you want to farm something more than just plants and animals? For example, what say you need a supply of living brains? In this book, the plot focuses on aliens who grow crops of humans on their planets, so that the brains of the humans can be harvested and used as biological control mechanisms for machines.

Seems a complex way of doing things – especially when bodies with brains attached can be had cheaply, whereas brains alone require substantial technological investment to make them suitable for that purpose and to sustain them in operation in the purpose.

(For example to keep a brain operation requires blood filtration – kidney, molecular synthesis – liver, food acquisition systems – gastrointestinal tract et cetera). However, I suppose you don’t have to pay enslaved brains so maybe it is all cheaper in the long run. The book I think serves as a model for the movie “Skyline”, although the movie focuses on the garish acquisition of the brains, not the lives and achievements of the characters seeking an escape from the primitive planet in which they were born.

Charles Stross: Saturn’s Children. The author raises the possibility that human exploitation of the planet is limited. Using every possible part of the planet for food production and for sustenance of human life, destroys other life forms.

The by-products of human technological existence change the nature of the planet – in this story effectively causing a runaway greenhouse effect which “cooks” all life upon the planet. I think the greenies would love this one – except for the fact they are replaced by mechanical robots who don’t care about “green” in any way at all.

Peasant farmers appear in many science fiction books. They often appear as portraying an idyllic form of existence – humanity in tune with nature. The reality is that commercial farming and industrial food production produces far more food with far less effort by far fewer humans. The food quality is higher as the growing environment is optimised to allow maximum growth of the plants or animals being utilised.

Frank Herbert: Dune. The Fremen form a human ecological force aimed to change the biosphere of an entire planet – in effect to Terraform a planet. Through the use of technologies, plants can be sustained. Calculations have revealed that if 10% of the biosphere can be engaged with agricultural plantings, a sustainable mini environment can evolve for earth based plant life used in food production. The possibility even exists that there can be many plants – even plants bred for their aesthetics rather than for their food producing capacities, to be introduced into the biosphere.

James Hogan: Bug Park. In the vertical farms of the future, optimising plant and animal environments may well require domination of the micro environment. Insects are quite capable of colonising the tops of skyscrapers and other closed environments. They will need to be controlled in any situation where they may compete with or damage farm crops. Micro-robots may well be the frontier that interfaces with the insect world, allowing humanity to dominate insects. Other possibilities such as “Insect Lasers” may be valuable adjuncts.

Joseph Green: Conscience Interplanetary. Crier is an intelligent plant that understands its own growth requirements and structure. Knowing a plant that knows its own needs could be a valuable interface with the plant world. How better to know them than to have on your side, someone who has joined them? There is much value in the process of “walking the walk” in understanding others. Who better to do it than a plant?

Iain  Banks: the Culture series of novels. In many extreme high-tech science fiction novels, food is synthesised, not grown. Food production is undoubtedly the most limited of human capacities. It cannot be ramped up quickly. There are huge lag time between design and yield, (planting and harvesting). In the event of a crisis, this is the Achilles heel.

The answer is to synthesise food on demand using industrial and chemical processes and then to modify the output to resemble different sorts of food. Technological know-how becomes important in the assembly process (sort of like cooking), to make foods desirable as well as nutritious and plentiful. I think in the long run this is where food production needs to go.

Certainly if the human population should burgeon, as has been suggested by the Paill authors, the glucosification (derivation of glucose) from lignocellulose will be the key industrial process upon which food for the masses will rest. Currently less than 10% of the crop forms the “food” of the crop.

The other 90% being the plant which supports the food derived from the crop e.g. the grain  from rice  stalks or wheat stalks. If lignocellulose can be broken down to glucose, food production can be increased at least tenfold, and with a lower footprint on the planet than current farming methods, even with a substantially higher human population to support.

Shopping in the Fortitude Valley or the city Central: the canyons of steel.

Shopping Malls throughout the city.

Developing desert plants or high-temperature plants. If we can develop plants capable of living at temperatures of say 60°, we may be able to use desert based greenhouses as food production harbours.